Being on a 10-acre farm, surrounded by woods and having a creek running through your property, we get a whole lot of unwanted visitors. Some are fine and mosey along without causing any problems, but others, they overstay their welcome and cause serious damage.

We’ve had problems mainly with groundhogs and racoons. The groundhogs burrow down and make tunnels and holes under the covert over our creek  (our driveway). Which is a huge compromise to the structural integrity of it. They also tunnel down into our garden and snack on our root vegetables.

Racoons, man are they a nuisance! They make their homes in the old hay lofts of our barns and structures on the property. They tear out insulation and other material to make a nice cozy place for them to snuggle in during the days causing damage and a huge mess. Racoons carry lots of diseases, Rabies being one and Round Worm being another. Round worm is found in their feces and can make both humans and animals very sick if ingested. They tend to poop in one place and create what is called a “coon latrine” which is a huge disgusting mess to clean up. Recently they’ve damaged the workshop in the horse barn as one of their latrines has broken through the roof. They’ve also clawed up a chicken pretty good!

So, anyways, they have got to go. They are way too damaging to our property. We went to Farm and Fleet and picked up some live traps. We learned that dog food is one of the best baits to use for coons and for other varmints.  So we started baiting the traps and low and behold, we were successful. We caught several coons and several groundhogs! YAY!  After a few weeks, the traps kept coming up empty so we stopped putting them out. We must have gotten a good deal of them out of the way.

Well, a few weeks ago, we heard some noises in the loft of the old hog house and determined, “shit, coons are back.” So we put a trap out in hopes to get rid of them again. Here we go, round 2.
Saturday morning Joe went out to check the trap, hoping to have caught a coon. Instead, he found this pretty calico kitty waiting to be let out of the trap. 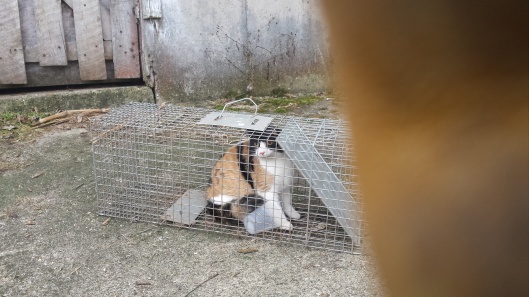 Sweet kitty just hanging out in the trap, waiting to be let out.

This is a prime example of why we don’t use poison or decon to get rid of our pesky problems. Many have suggested using Mt. Dew and rat poison. They swear we wont have any more coons on our property if we put a pan of that mix out. I just can’t justify possibly killing innocent feral cats or anything else that was out to get a quick snack. Worse yet if the animal survives long enough to get away, anything that eats it can start passing the poison up the food chain.

Also a reminder as to why you need to be diligent about checking traps. Even if the trapped animal will ultimately be destroyed, it’s not humane to leave it in the trap any longer than a few hours. Set them at night and check them first thing in the AM.

The most humane thing to do is too keep your buildings tight and keep critters out in the first place. With numerous structures on our property, that’s a task we’re still working on!