We’ve promised a lot of follow-ups on the projects from the winter – but it’s always easier to write about things that are more recent. So here’s a quick update for the spring.

Time to mow the lawn:

While we have a large garden, pasture and woods on our property – we still have no shortage of manicured lawn. That will likely change as we increase the footprint of the “farm,” but it will always be a sizable amount. So, cutting our grass is a time-consuming endeavor – made increasingly complicated by the constant upkeep of the lawn tractor. We bought a used one three years ago with a 42-inch cut and a few hundred hours on it for a 1/5 of what they cost new. A decision I’m mostly happy with. Many parts are cheap online, so upkeep has been more a matter of sweat equity than dollar bills.

END_OF_DOCUMENT_TOKEN_TO_BE_REPLACED

I guess it’s more of a bur cutter – but that didn’t have the same ring. Why am I “mowing” the pasture in April with a barbed-wire infused log? Well, despite the fact that the plants are almost totally dead by October, they’re mischief is just beginning at that time. The stalks collapse very slowly and the prickle seed of the plant is ripe for the stickin’ for months to come.

END_OF_DOCUMENT_TOKEN_TO_BE_REPLACED

One of the last farm auctions of the season, and as Joe was off getting coffee, I bid $4 on a wooden bench and won. The bench came with a cushion with some very faded, well worn fabric that just had to go. Whippie! A new bench and a small project for me. Here is what I did:

Here is a before and after for ya.

END_OF_DOCUMENT_TOKEN_TO_BE_REPLACED

We’ve sorely neglected our blog the past few weeks, mostly because we dove into renovating one of the upstairs bedrooms. The second story of our house has been basically closed off for two years, but with the family growing we’ve decided to start sprucing it up. It has had zero updates since the 1970’s – or at least nothing significant – so there is much to do. 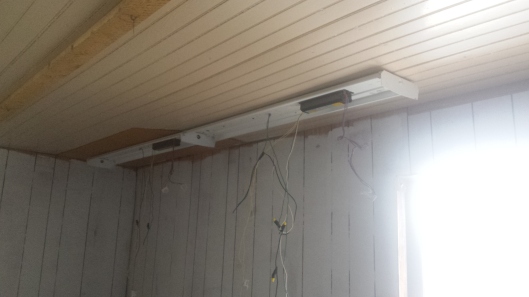 Like every project, one of the early steps was removing chains of florescent lights.

I will have a number of posts on this project when it’s done, but we’ve tackled too many different things to do one post. We’ve continued to struggle to find contractors, so even on the rare occasion when I realize a job is better left to the experts, calling one isn’t an option. In the meantime, the vast array of work we’ve taken on has had me thinking about a topic dear to my heart: the lack of skilled trades.

I think it’s certainly true that many in this country have come to view these once-sought-after jobs as the employment scraps leftover for those who can’t go to college. I know when I was growing up, that’s how middle-class suburban high schools pitched it.

That is a terrible shame because at the end of the day these jobs are often more important and even more complicated than many of the ones of college students end up with. Any successful economy needs men and women wearing blue and white collars, don’t get me wrong. What I take issue with is the notion that one is a better representation of success than the other.

Plumbers, electricians and carpenters provide the most essential work there is, and their jobs are no more likely to become automated than a CEOs. We need these people around and we should encourage ALL students to go after these jobs if they have an interest – even if they do score a 34 on their ACT. Shouldn’t your electrician be as smart as the guy deciding what Facebook ads you see? But, instead of listening to me on a soap box, just enjoy this curated content from AFV as proof we still need skilled tradesman. So far, our project is going better than these… so far.

How to install a toilet. While this is not the most pleasant DIY task, it’s not quite as nasty as I expected, especially since one of the reasons I was replacing the toilet was lingering odors.

The second reason was hard water had essentially ruined the old one, as explained in the water softener post. The other, most significant reason is that the wax ring was clearly shot even when we bought the house and the previous owner put tile around the toilet instead of under it – a big no-no. So, replacing the floor AND toilet were both required.

I went with a cheap but decent looking vinyl floor because I don’t know how permanent it will be. We would like to start from scratch on that bathroom in a few years’ time. 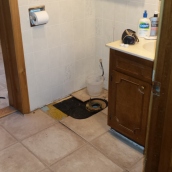 So, how to install a toilet.

Lets face it, our sheep are not “livestock” they are pets, they are my pets and I love them dearly. Therefore, they get treats. Mostly they get treats at night so they know that when they come in to their brand new stalls they get fed something delicious and will hopefully spark them to come in on their own every night without having to get the dog to round them up in the dark. So far, we are about 90% to that goal. END_OF_DOCUMENT_TOKEN_TO_BE_REPLACED

With the amount of walls I’ve built in the past year, I feel like if Donald Trump is elected I’ll certainly be up for a cabinet position. Of course, I’m building mine to keep dirt in, not people out. While the silo stone walls I’ve erected up have been mostly decorative, the garden wall on the back patio and the one in front of the house are serious retaining walls. And both suffered from horrible original construction – mostly from a misunderstanding of fluid dynamics and hydrostatic pressure. Put simply: a retaining wall is only as good as the drainage behind it. END_OF_DOCUMENT_TOKEN_TO_BE_REPLACED

**Here’s a post from a few months ago that somehow went un-posted. It was our big spring project and is somewhat relevant to our big fall project – which my husband will explain later this week.

When we first moved in to our farm there were was this dead space behind the bedroom wall outside. It wasn’t really grass and it had a rocky base to it. Almost as if someone laid down gravel and never finished a project here and let the weeds and grass grow through it. On top of the lack of grass, it also had a huge 6′ high x 25’long concrete retaining wall that was cracked and falling over.

END_OF_DOCUMENT_TOKEN_TO_BE_REPLACED

Last Sunday we saw a CL ad from a man a few miles away trying to “clean up” some items on his property… before the county did it for him. Ever the bargain hunter, Kate suggested we head out. And he did list what seemed like some useful items – lumber, shingles, gates…

END_OF_DOCUMENT_TOKEN_TO_BE_REPLACED

A step up. In the literal sense of course! This post is plain and simple. How to build a set of steps. END_OF_DOCUMENT_TOKEN_TO_BE_REPLACED